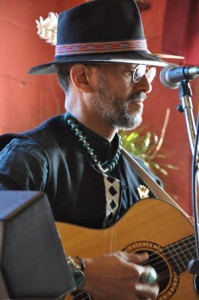 Influenced by multiple musical styles, in particular Boston’s 60/70’s folk scene, Tomy Wright embraces the contemporary folk genre as his vehicle of artistic expression. Having served 30 years in the military, he musically and professionally maintained “a foot in both camps,” with concurrent, long-term publication subscriptions to Rolling Stone and The Army Times.

A world traveler and Marylander since 1997, Tomy penned what The Baltimore Sun called “a loving ode to a slow road” supporting the successful grassroots efforts to ensure Frederick County’s gravel road legacy. He also achieved national airplay on NPR’s Car Talk (show #0321) with his “I’m Gonna Get Me a Car.” 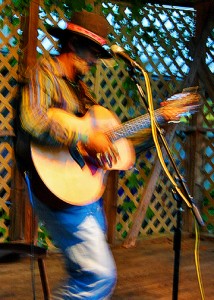 Tomy developed his musical appreciation early on from his parents who shared their love of a wide range of music from Puchini, George and Ira Gershwin to Lerner and Lowe, Ray Charles to Jim Nabors, the Ink Spots to Mahalia Jackson, Harry Belafonte to Lawrence Welk. His mother had him play in a rhythm band in Kindergarten. His first instrument was his father’s childhood violin, which he played for 8 years. The family regularly attended the Boston Symphony and Pops and on Saturday mornings his mom would take him to the Youth Symphony.

He remembers receiving and playing their Christmas gift LP of Country classics of Glenn Campbell, Roger Miller, and Eddie Arnold et al, over and over; and also hiding Meet the Beatles under his bed, having spent his haircut money on that purchase. He picked up the drums on his own wanting to be Ringo Starr and jammed along his diverse and ever-expanding record collection of Beatles, Dave Clak Five, Yardbirds, Rolling Stones, Steppenwolf, The Amboy Dukes, Blue Cheer, The Jimi Hendrix Experience, A Band of Gypsies, Big Brother and the Holding Company, The Cream, Deep Purple, Grand Funk Railroad, The James Gang, Led Zeppelin, Santana, Vanilla Fudge, The Who, and Johnny Winter (just to name a few).

So in the late 60’s was it any wonder when his mom said, “He loves those dirty blues. We don’t listen to that music!” hoping for a different outcome? But they didn’t discourage him, they even encouraged his musical friends to come and play in the basement. At least his parents knew where he was and with whom he was jamming. And we’re thankful! 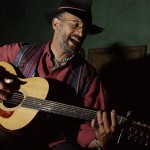 In 1967, Influenced heavily by a Boston DJ on WBZ (FM 103), Dick Summer, Tomy listened intently to Summer’s ‘Loving Touch” show of poetry readings and commentary on folk music featuring the premiere artists of the day, but particularly: Phil Ochs, Tom Rush, Jonie Mitchell, and Arlo Guthrie. And later Boston’s WBCN, rounded out Tomy’s schooling of FM radio Album Oriented Rock of Psychedelic Rock, Soul, Rhythm and Blues, Reggae, and New Wave. He was well-versed in the musical language of the Woodstock generation.

In 1968, Tomy started his courtship of the guitar. The loan of a childhood friend’s red Gretsch hollow body electric guitar for two years and a Jimi Hendrix Electric Ladyland Song book started the real journey of musical discovery. And in 1971, with the purchase of his own classical guitar inWashington,DC, consummated the marriage between man and guitar–a 40 year love affair. 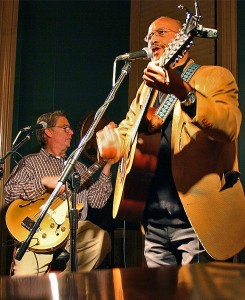 And as long as Tomy is performing and experiencing other musicians, he assures us this list will continue, but will still be “Tomy Music.”