The Parts
Influenced by multiple musical styles, in particularBoston’s 60/70’s folk scene, Tomy Wright embraces the contemporary folk genre as his vehicle of artistic expression. Having served 30 years in the military, he musically and professionally maintained “a foot in both camps,” with a concurrent, long-term publication subscription to Rolling Stone and The Army Times. 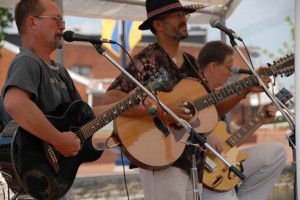 A world traveler and recent Marylander, Tomy penned what the Baltimore Sun called “a loving ode to a slow road” supporting a successful grassroots effort to ensureFrederick County’s gravel road legacy. He also achieved national airplay on NPR’s Car Talk (show #0321) with his “I’m Gonna Get Me a Car.” He most recently was recognized by Frederick artist Jeanne McDermott as one of the many musical images ofFrederick representing “Live Coffee House Music” on her “Music is the Key to Happiness” Key as part of the Frederick Arts Council Keys of Frederick Project. Brooke Robbins, on bass, guitars, and vocals and David Mays, on guitar, are fellow Maryland performing songwriters in their own right, have joined Tomy from their association at The Frederick Coffee Company’s Tuesday Night Open Mic (FCCo OM). Their first performance in this trio configuration as Mays, Robbins & Wright (MRW) was on August 11, 2007 as an act in a benefit concert for Adam Messer, Tomy’s brother-in-law, who has subsequently died fighting stage 4, lung cancer in January 2008, three weeks short of his 50th birthday. 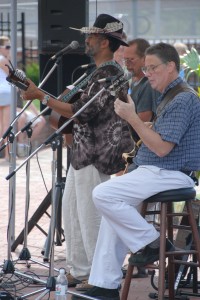 The True Definition of Synergy*
Recognizing the musical genius of MRW and their potential as a viable unit, the association continues today. In the desire of replicating the sound of his first CD, Tomy One “M” live on stage, Brooke and David have learned Tomy’s older and newer songs. The tasteful embellishments have forged a new sound and identify to Tomy’s compositions, and reciprocally to Brooke’s, and David’s contributions. In late 2008, David’s health took him out of the line up. Enter Russell Iceberg, the latest member of TWSO and like the other members, a product of the FCCo OM. He is a teenage prodigy who sings, plays violin, electric and acoustic guitars, mandolin, keyboards, bass and flute. He has added a whole new musical dimension and validates the “Orchestra” name. Seeing Russell perform and grow with every performance is a treat you don’t want to miss. He is also the Most Valuable Player for Tomy’s Contemporary Folk Musical, “Celtic Faerie,” expertly playing violin, mandolin, guitars and flute.

* synergy n. , pl. -gies . The interaction of two or more agents or forces so that their combined effect is greater than the sum of their individual. [www.answers.com/topic/synergy]