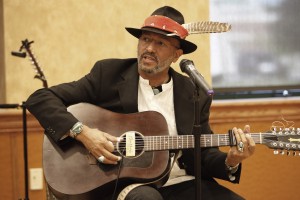 “When I first heard Tomy Wright play solo, I could tell there’s much more going on than meets the ear, that each song is part of the grand folk-rock opera of TomyWorld, and that the components should be fully fleshed out with accompaniment. Brooke Robbins and David Mays (both of whom can entertain an audience on their own), and together they have created fascinating, unpredictable, ne’er-a-dull-moment arrangements that reveal Tomy’s genius.”
Ron Goad, WAMMIE Award Winner
“The final musical [Celtic Faerie] is reminiscent of the Moody Blues, maybe with a touch of Jethro Tull.” Lauren LaRocca | Frederick News Post | May 2010
“The ‘dapper troubadour’…displays a flashy stage presence tempered by sensitivity…his music crosses many boundaries including jazz, soul and gospel.”
Tom McLaughlin | The Next 72 Hours | Frederick News-Post | 2004
“His music is also an expression of his into life and its frustrations, the evitability of death and a search for love and meaning in existence. He voices his emotions with humor and longing.”  Ann Keays  |  Stars and Stripes  | 1979

A BMI recording artist, and member of local, regional, national and international Folk music associations; additionally, on the Board of Director on Songwriters’ Association of Washington (SAW).  Involved with the Susquehanna Music and Arts Festival (SMAF) for 10 years.  Additionally, assisted Greater Washington’s

Join the Email List:
Tomy will safeguard your email address, never fear! Sign up to receive reminders about upcoming shows and releases.